I was not sure how to organize this blog. Should I arrange the recipes cronologically or by original manuscript etc. I decided to jump in and do whatever recipes were intriguing me at the moment. So here is the first recipe.

This recipe is part of a greater project, “The Pasta Project”. A dear friend of mine was making pasta at home trying to use the ingredients and methods of Maestro Martino of Como, a 15th century chef and Bartolomeo Scappi, a 16th century text. The project started out with the formed pastas of vermicelli, gnocchi and maccheroni (16th century spelling). As we rolled along the project morphed to included two sauces for the gnocchi, lasagna, and three pasta ripieni or stuffed pasta.

Most scholars agree that these little bundles were originally Arab in origin and came to southern Italy at an early date. By the 14th century ravioli were well known throughout Europe and they are included in several cooking manuscripts during this time. (2)

According to John Florio (3), a ravioli is a “bundle or a fardle”. In Martino (4) and Scappi (5), several ravioli recipes have no casing or dough. It was just the filling that was boiled in fatted meat broth. In modern times a ravioli has come to mean a dough wrapped filling while just the filling has become a dumpling, of sorts.

“To Prepare a tort of Lobster claws Get claws that have been boiled in water, shell them and grind them in a mortar with steeped pine nuts, fresh dates and marzipan paste; make a mixture of all that combined with sugar, fresh eggs, finely beaten mint, marjoram and burnet, as well as a little powdered mosticciolo, finely ground cinnamon and fresh butter, everything mixed together. With that mixture make up a torte with a small sheet of pastry both beneath and above. On fast days instead of butter use sweet almond oil, and instead of eggs, breadcrumb cooked in almond milk. You can also make ravioli of it with or without a casing, serving it dressed with sugar and cinnamon after it has been boiled. You could also make ravioli fried in oil – that is, encased in a dough made of fine flour, oil, white wine, salt & water” Translated by Terrence Scully: The Opera of Bartolomeo Scappi 1573 (pg. 580)

The following research on the wheats and dough is credited to my husband, Ben.

Any pasta recipe starts with the dough and any discussion of period pasta dough starts with a discussion of wheat. The nutshell version: the ancestor of modern wheat is einkorn wheat which is not a good bread wheat being that it is bitter and needs to be leached. Einkorn mated with a wild grass to produce emmer wheat. Emmer has developed into what we know as bread wheats and durum. Emmer is better for bread but is very hard to mill. The modern bread wheats Vulgare, Compactum and spelt are much easier to mill.

Durum, in latin, means hard. Durum wheat is a very high protein, high gluten wheat but it has a very low moisture content. This means that it is not very good for bread (but you can make bread with it) but it is perfectly suited for making pasta. Pasta made from durum wheat, once dried, can be stored for years. (6) (Storck 31-33) Semolina is a grind of durum wheat whose coarseness is equivalent to fine cornmeal. Scappi notes that plain, non stuffed pasta could be dried and stored for an extended period of time which was the purpose that dried pasta was originally designed (Scappi 48)

We have tried to make several period pasta using bread flour, spelt and cake flour (because Scappi uses the term “fine” flour) but the soft flours mildewed quickly. Pasta made with all purpose flour (a combination of soft and hard wheat flour) and semolina did not mildew. Our conclusion is that Scappi would have used semolina for all pasta including pasta asciutta, or dried pasta and all-purpose only for pasta to be used immediately or stuffed pasta. 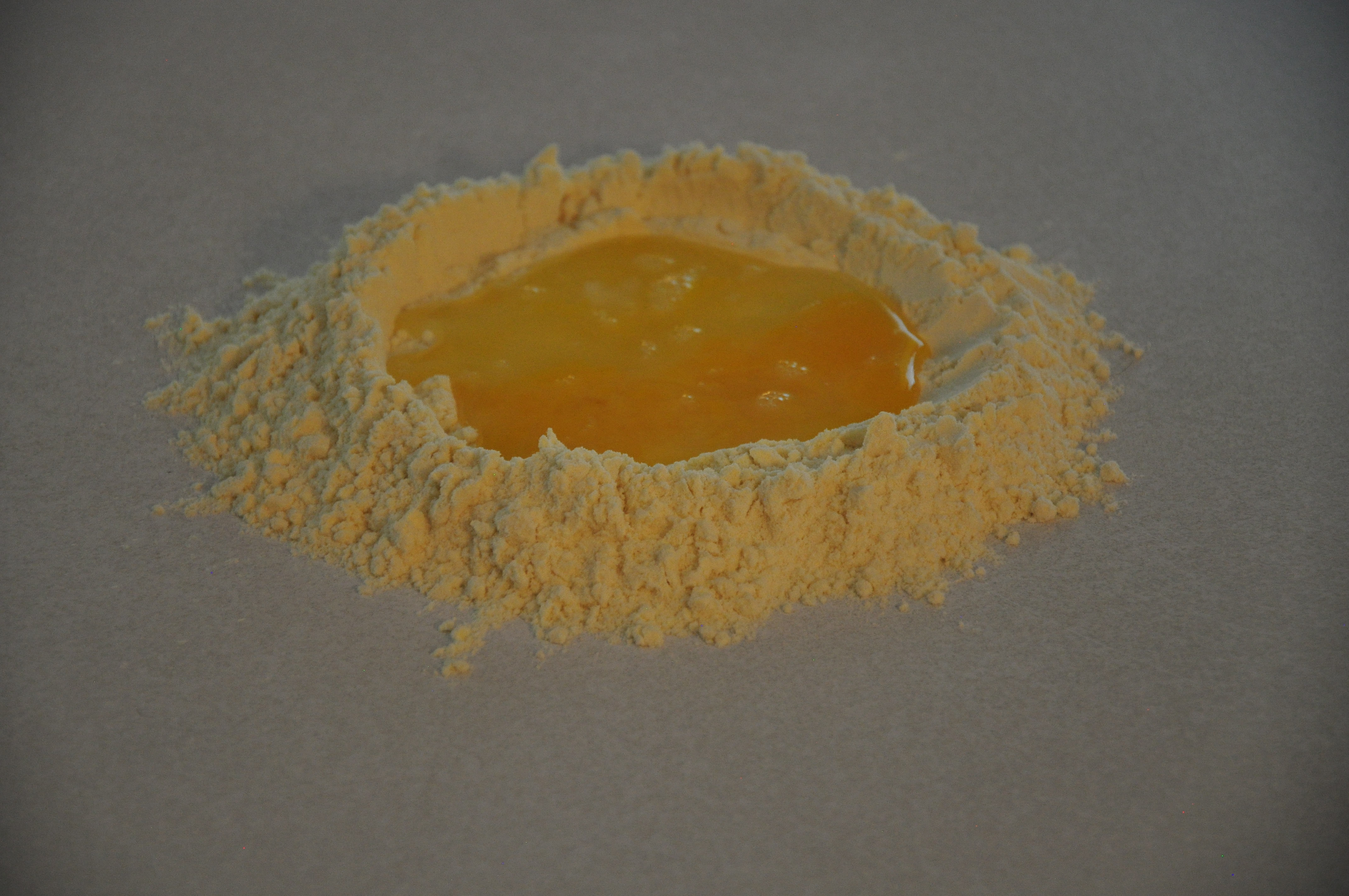 Make a well in the center and add the egg, olive oil, wine and water 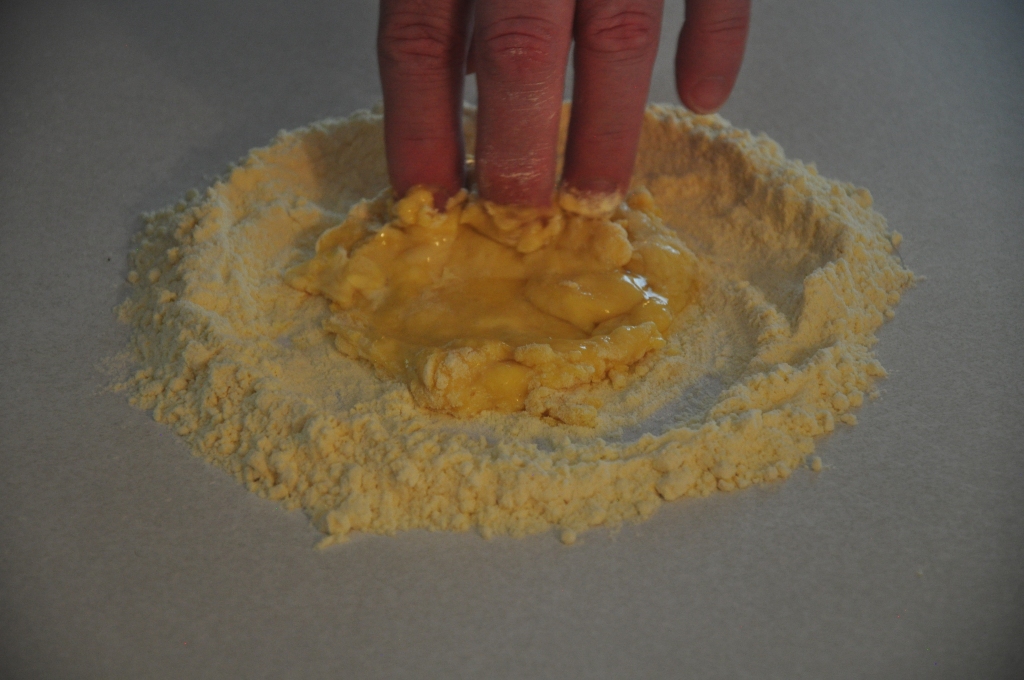 Use your hand as a whisk to incorporate the liquids.

Keep kneading until the dough forms a smooth subtle ball similar to play-dough in consistency. Let the dough rest for thirty minutes, wrapped in saran.Knead the dough for approximately 20 minutes. You may have to adjust the amount of liquid or flour.

When the lobster is cool enough to handle put them in a food processor with the steeped nuts, marzipan, sugar, eggs, mint, marjoram, mosticcioli, cinnamon and butter. If you want to stay strictly with period methods, take the lobster and cut it very finely with a sharp knife. Almost like you did when mincing the fresh herbs. Add everything into a medium bowl and stir until it is a homogenous mixture. If you want it even finer, after you chop the lobster put it into a mortar and grind it to a paste. I usually skip this step because I like a bit of tooth to this ravioli.

Cutting with a fluted wheel into 2 inch ravioli

After your filling is made, roll the dough into a rectangle about 1/8 of an inch thick. Place filling in one tablespoon lumps about two inches apart on your dough. Quickly baste the dough in between the lumps with water including the outside edges. Place another sheet of dough over the top and cup your hands around each lump and press all the air out. If you skip this step, your ravioli will burst while cooking and the filling will boil out. Cut the lumps apart into two inch squares using a pasta wheel, knife or even a pizza cutter.

Cook ravioli in rapidly boiling, generously salted water. You can also use a meat broth to boil the ravioli. They will take about five minutes or so to cook. A general rule is when they float to the surface, cook them for a minute longer and then take the ravioli out.

So after we cooked almost all of these ravioli we realized that Scappi mentioned frying them in oil. We fried the last 8 ravioli and they were EVEN MORE DELICIOUS, if you can believe that!

During our presentation to the populace and judging for the pasta project, these were always the first to disappear!

4) Como, The Emminent Maestro Martino of. The Art of Cooking: The First Modern Cookery Book. 1465. 14th Edition by Luigi Ballerini, translated and annotated by Jeremy Parzen, Regents of The University of California, 2005. Print.